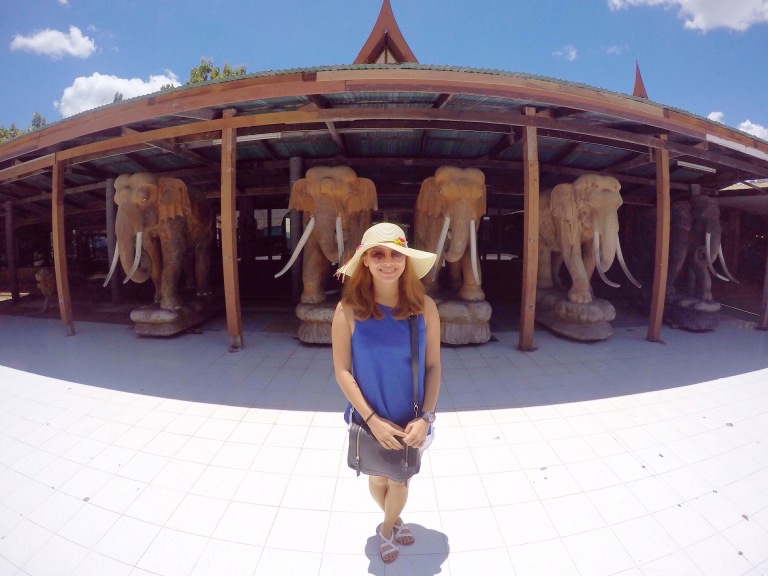 When planning, I always consider the itinerary based on the nearest tourist attraction and easy transportation. I chose a hotel that’s near the BTS (Bangkok train station) so it will be easier for us to go around Bangkok.

The flight was very early, around 4 AM. It’s about 3 hours and 20 minutes flight. Upon arrival at the airport, we took a taxi going to the hotel. We learned from the driver, that there was a bombing in Bangkok city the night before we arrived and people were injured. He said it was a terrorist attack. We got really scared. While in transit, we decided to stay close to our hotel.

We didn’t have enough Baht at the moment but it’s a good thing there’s a bank near the hotel. One peso is equal to 0.76 Baht. After the money exchange, we’re ready to go!  We took the BTS, and went to Chao Phraya River. We thought, a cruise in the river should be safe. The cruise was crazy! The boats there were so fast I almost puked, it’s like riding a roller coaster in the river. Boatman doesn’t care of their passengers. At that moment, I wanted the cruise to end. (But maybe it’s just me 🙂 ) After the cruise, I thought “okay I can breathe now”, then we saw a lot of policemen, news anchors with cameras and people in the area. We asked around and they said a bomb just exploded! My heart stopped and thought, if we finished the cruise earlier, we could’ve been there during the bombing! We hurried back to the hotel shaking. At the hotel, we re-arranged our itinerary.

We researched for the best food there is in Bangkok. We saw that their specialty is Pad Thai and the best restaurant for it is Thip Samai. So we took a tuk tuk and had dinner there. It was really good! 🙂 After dinner, we just strolled at Siam Square.

Since we re-arranged our itinerary, we opted to stay out of the city. So for our 2nd day, we went to Dream World. It’s an amusement park in Thailand somewhat like Enchanted Kingdom. Good thing is that the hotel has tour packages so we didn’t have to worry about the transportation going there, it’s all paid for including lunch. We spent the whole day there. If I rate the park, it’s 6/10. It’s literally just for kids between 5-10 years old. Not that awesome, Enchanted Kingdom is way better. Just a heads up. 🙂Edit 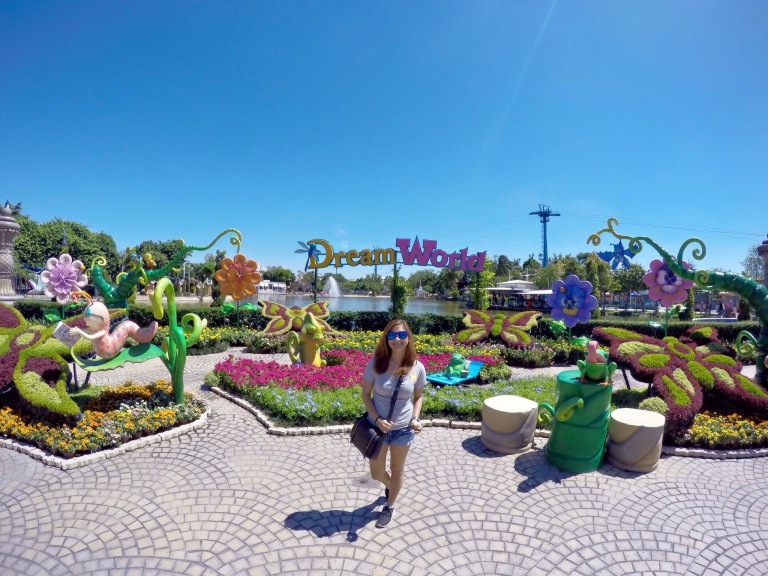 We went home at around 5:00 PM and decided to have a fancy dinner. Street dinner BKK style haha! The food was amazing especially their fried rice. You can eat fried rice and you’ll be so full. I ate Shrimp Fried Rice for only 100 Baht. It’s already a full meal with 4 large shrimp. Yum! 🙂

On our 3rd day, we really want to do what we planned to do. To ride the Elephant and experience the Floating Market. We still booked the tour with the hotel. We left at around 6:30 AM to go to Damnoen Saduak Floating Market. It’s about 1.5 hours from Bangkok. There’s a lot of tourists and even though it’s so hot and traffic jam, everyone seemed to enjoy. And we did too! 🙂

My favorite activity in the trip was the Elephant Ride. Yes, I know that it’s kind of wrong but when we saw the Elephant Show, we found out that elephants really helped the Thai people with the chores in the past. So I didn’t feel guilty after. They are really nice and gentle. 🙂

At night, we decided to go to Khao San Road. Most of the tourists go here to have some drinks, chill and party. There are clubs in the area, but we opted to stay in the streets and eat.

On our 4th day, we decided to visit the most popular temples in Bangkok. After the breakfast, we went to The Grand Palace first. Tip going there: Do not wear sleeveless and shorts, they won’t allow you inside. They will provide polo shirt and malong , but mind you – it doesn’t look good in pictures. I hated it, I was wearing sleeveless and shorts. 😦
Anyway, they won’t call it The Grand Palace for no reason. It is just amazing inside, the colors and structures are amazing. A lot of tourists really enjoyed taking pictures, some also prayed inside the temples. 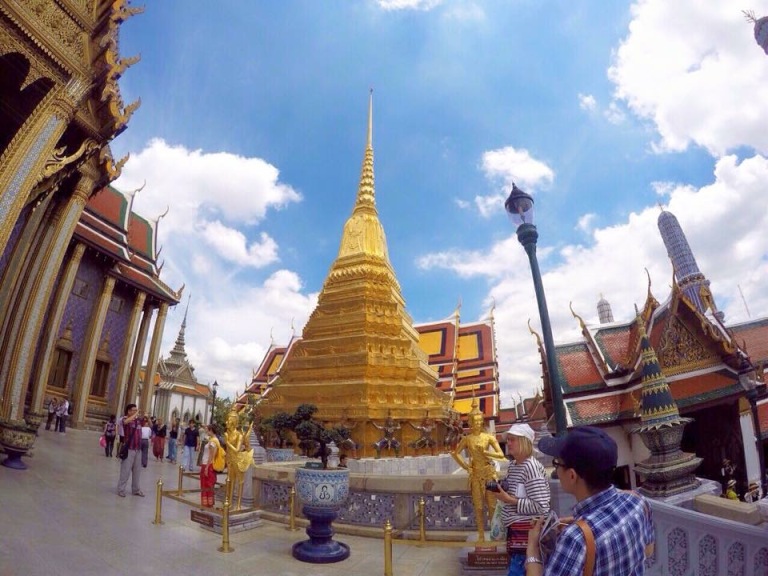 We had our lunch just across the street of The Grand Palace. After lunch, while walking, we saw a park with hundreds of pigeons. Like kids, we played with them. It was so cool, I felt like I was in Europe. :)

After the pigeons, we planned on going to the other temples. (Wat Pho, Wat Arun etc). Then this guy approached us. He asked where we are heading, we told him to Wat Pho. Then he said it was closed because people are offering prayers because of the bombing. It was 12:00 noon if I remember it right, and he said it’ll be open by 2:00 PM. Then at the back of his pocket, he had a map. He then tried to offer us a “government tuk tuk” to tour us around the city and other temples. He asked how much we paid for transportation going to The Grand Palace, we told him 100 baht in a taxi. He said we will only pay 40 baht for the city tour. He even said we don’t have to worry because he’s tourism officer. We were naive and thought that was kind of them so we rode the tuk tuk. I asked the driver what’s the difference between a regular tuk tuk and a “government tuk tuk, but he said he can’t understand English. First stop was school where there’s a small Buddha, we just really want to take pictures then this man, very fluent in English, talked to us. He told us that he lives in the US and just visited here with his wife and kid. He mentioned that there’s a travel expo, where jewelries are cheap. We said, that’s part of the city tour and he was so talkative and promoted it. I was already skeptical because it seems that everything is scripted, I thought that there’s something fishy. We left and the driver took us to a jewelry shop, he said just look and take your time. We didn’t buy anything as we don’t have plans to buy any. Then he took us to a depot, where there are belts and bags for sale. The driver said stay for 15 minutes, since we didn’t want anything there, we only stayed for like 3 minutes. We went out, the driver was waiting and texting. When he saw us, he was so mad and said “you are stupid, I told you to stay 15 minutes”. We got furious but we just left and didn’t pay him 40 baht. I was shaking because I can’t believe we were scammed. I wanted to search Google to know if that was a scam but there was no WiFi at the time. We took a taxi and just decided to go back to the hotel. There are a lot of Thai Massage parlors near our hotel, so we decided to have a foot massage. There was WiFi, I Googled it and I was right. That was a scam. So yeah, same lesson as what was taught to us when we were kids – DO NOT TALK TO STRANGERS.

After the Thai massage, we changed clothes and had dinner at Khao San Road.  We did some shopping for pasalubong.

I also planned to eat some exotic street food, however when I saw it – it looks like it’s been displayed there for years LOL. No one was really buying and eating it, instead, they just take pictures of it. So I did the same haha! It costs 10 Baht for a picture with the fried scorpion, worms etc.

That concludes my Birthday Trip! Below was our itinerary and expenses during the trip. Enjoy! 🙂